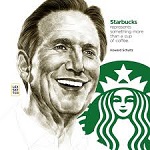 Such is the power of branding. Schultz left, came back, and has now come back to reenergize a brand that has floundered with digital-based customers that go through the drive thru-70% of all orders- and don’t come in.

Existing in somebody else’s mind sounds like a New-Age psychobabble motivational poster headline until you realize that is where your brand exists.

I once heard that PR was what you heard about yourself when you were in the room and reputation was what they said about you after you’d left it.

Chief among his many brilliant ideas was his transcendent brand idea….

Does your brand have integrity or do you call it the graphics system or the identity standards? Or save us, the guidelines. Captain Barbossa would have said, “They’re not rules really, they’re more like guidelines”!

Most political campaigns are a form of combat. Particularly, in my home state of Texas. A certain way you win is by killing the other guy. There are big risks however with this as the core political strategy.

Many of the branding projects I have worked on begin with a problem.

“We don’t seem to be able to raise as much money as our peers”.

“We have declining customer counts”.

There has never been a better speech about branding than the one given by Curly to Mitch in City Slickers.

C. ”You know what the secret of life is”? This.